When we last updated the Dulwich Village Forum website, we had reached our target of £4,000, raised from the community, to commission traffic consultants Phil Jones Associates (PJA) to carry out the first part of a feasibility study into an alternative design for Dulwich Village Junction that would put pedestrians and cyclists first.

Members of the Dulwich Village Forum then asked local councillors whether this year’s underspend from CGS funds (local projects that hadn’t in the end gone ahead) could be used to complete the modelling, provide a technical drawing and note, and pay for PJA traffic consultants to make a presentation to Southwark and TfL. This was agreed at the Dulwich Community Council meeting on 1 February.

PJA’s presentation to Southwark took place on 15 March, and the minutes are reproduced below. There is also a link here to PJA’s powerpoint presentation.

As you can see, we are now waiting for Matt Hill from Southwark to report back to Councillor Wingfield, who takes the decision on the final design for the junction.

FOR DULWICH VILLAGE JUNCTION ON QUIETWAY 7

Will Bradley, TfL  (representing Will Norman, Walking and Cycling Commissioner)

Brigid Gardner pointed out the advantages of the DVF proposal: dedicated cycle paths, a low-speed environment with less pollution and more comfortable environment suitable for a village community and conducive to more local trading. She demonstrated with ample quotes from TfL’s recent publication Healthy Streets for London that these were very similar to the aims TfL itself now espouses.

She said she recognised that modelling suggested that traffic flow on the N/S axis might be subject to queues in the am and pm rush hours but that even ‘Healthier Streets’ recognised that making a better long-term environment might incur short-term congestion.

Phil Jones and Andrew Saffrey gave a presentation showing how the three-roundel could work. They provided interesting modelling. This did show that there could be long tailbacks in the assumed rush hours, but PJA made the following points:

(i) rush hours amounted to only around ten hours in the week, whereas the improvements to the general conditions including reduction of delays at the junction itself and air quality improvements would continue around the clock

(iii) vehicular traffic statistics had shown a steady decline over the last decade and if this trend continued at the same rate into the future, the modelling showed it could mean the problem would dissipate and

(iv) nobody could be sure without actual trials what alternative action drivers would take to find a faster way through.

Phil maintained that the cycling pathways including the new ‘parallel crossings’ (for both cyclists and pedestrians) would work well. In response to a query as to whether the cycle routes would be excessively long, for going round the junction, Phil clarified that the cycle routes would not be one-way as in the original sketch by DVF, but instead be two-way, in effect making a small local network of QW routes all-round the junction and mostly separated from it, allowing choices of routes and potential shortcuts. Furthermore, cyclists would enjoy priority on the zebra crossings, which is possible with the new parallel crossing authorised in the latest regulation.

Phil also said that a PJA scheme in Trinity Place, Bexleyheath, not dissimilar to ours, worked very well and had received a civic award.

Will Bradley preferred the original design because it was ready to be built and, in his view, was more likely to encourage cycling by protecting cyclists from motor traffic, and to benefit pedestrians. He also agreed with Southwark’s concern that the modelling of the junction showed the design would not be feasible with the current traffic levels. However, the consensus was that Quietway 7 reflected an earlier, narrower view of how to achieve healthy streets and environments. It was tacitly conceded that the DVF proposal might even be superior and certainly more in keeping with current thinking.

The issue is the old one: that the current plan is ‘ready to go’. TfL wants to sign off the Quietways. The money can only be given for a fully costed plan. In theory it could be agreed that the money could be held over until an alternative plan was ‘ready to go’ but there would be no guarantees – and in current circumstances it is highly risky as TfL is about to lose its large grant from central government.

Southwark believes that their current scheme is ready to be implemented and can deliver benefits in the short term for all modes, and is funded.  While they agree that there are merits to the DVF proposal, it is at the very early stages and to get the proposal to a ‘shovel ready’ state is likely to take in the region of 2 years and significant expenditure. It was not certain that it was deliverable and if it would be acceptable at consultation.

The DVF pointed out that the current scheme had not been acceptable at consultation (70% had rejected it) but that did not seem to have made any difference. Also it did not seem good sense to spend money on something already known to have shortcomings, if delay would result in something better.

It was suggested that a cheap version of the current plan could be built but the problem is that the most expensive part is the signalling and that can’t be done on the cheap.

Since there was disagreement between TfL and PJA as to whether traffic in the area was increasing or decreasing, another idea was to do a trial of the traffic elements of the scheme. This might be for a, say, two weeks’ period with the two main roundels (not the Calton /Court one) and zebra crossings (not the cycle pathways or anything else) painted on the road in order to trial just the traffic flows in the alternative proposal.

It was emphasised that these studies had been crowd funded and represented what could be done within the limitations of time and funding. But certainly further refinements of the proposal and more analysis would be possible.  The potential for this alternative was a much better public realm, better conditions for both pedestrians and cyclists and better air quality.

The main point was whether this sort of scheme was one that the authorities could support and work with DVF and PJA to refine and take forward.

4. ACTION TO BE TAKEN

Here is a hand-drawn sketch, based on detailed drawings by PJA, to show how the cycling ring round the junction could work: 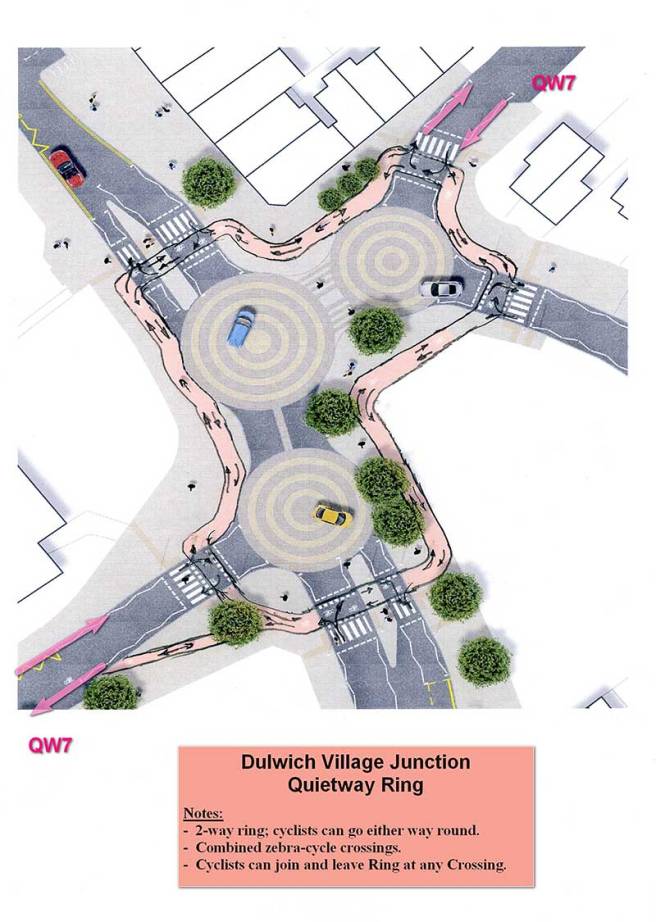 Why is the junction changing?

As part of Southwark Council’s plans for a network of routes to help less confident cyclists, there are plans for a ‘Quietway’ to run down Calton Avenue and Turney Road. This includes a new design for the junction at Dulwich Village:

This design has been approved in principle. But Southwark promised, just a few weeks ago, to listen to what the local community has been saying for nearly two years, and to consider an alternative proposal.

The views expressed below have not been formally approved by residents’ associations or local businesses or schools. But they summarise many of the issues raised in community meetings, in emails to the council, and in public consultations run by Sustrans and Southwark.

What are the objections to Southwark’s design?

Roughly two-thirds of those who responded to the recent public consultation objected. You can see the result of the consultation here:

You can also see the results of a survey of residents in Court Lane, which leads directly to the junction, showing that 92% of those who responded had little or no confidence that the proposed changes to traffic had been properly modelled.

Southwark’s design for the junction, where there are two schools for primary-aged children:

The point of the Quietway is to create a network of routes for less confident cyclists. This design creates several potential conflicts between cars and cyclists – please see the list of technical problems in the section at the end.

There are concerns that reducing three lanes to two, and changing the priority from Court Lane to Calton Avenue, is likely to increase traffic queues and rat-running, which in turn will increase air pollution and the risk of accidents.  The Dulwich Community Council has asked for pre-construction trials.

There are also concerns about how the Quietway and new junction design will be affected by the increased congestion and parking difficulties that have been seen on Turney Road and Burbage Road since the introduction of the North Dulwich Controlled Parking Zone (CPZ).

What could be the alternative?

Many people in the local community are asking Southwark Council/TfL to consider an alternative design that puts pedestrians first, with:

A design like this keeps traffic running slowly but continuously and adapts perfectly – and cheaply – to any variability in traffic flow.

(As we all know, traffic through the junction is sometimes heavier east to west, and sometimes north to south, and there are peaks of congestion at different times of day and year. This YouTube clip shows how heavy traffic on Calton Avenue, part of the Quietway, on school mornings forces cyclists and pedestrians to share the pavement.)

Creative solutions like this have been applied to junctions in other parts of the country. Please look at the YouTube clip about a ‘shared space’ solution in Poynton in Cheshire.

What are the advantages?

A ‘low-speed environment’ junction like this in Dulwich Village would:

Is it possible to get Southwark and TfL to consider a design like this?

Southwark and TfL have finally, after months of persistent persuasion, promised to give a design based on roundels and zebra crossings proper consideration.

Expert traffic consultants Phil Jones Associates have agreed to carry out an initial assessment which will show whether a design like this is feasible.

Members of the Dulwich Village Forum tried to find funding for this initial assessment from a variety of different sources, including Southwark and TfL. In the end, because there is so little time before plans for the Quietway and junction are finalised, crowdfunding (raising money from the community for a one-off project) seemed the best option.

The total cost of the PJA assessment is £9,000 including VAT.

The first part of the assessment  – the feasibility study  –  costs £4,000 including VAT.

And finally (for those interested in the detail), a few more technical problems with Southwark’s design that haven’t yet been answered