Why is the junction changing?

As part of Southwark Council’s plans for a network of routes to help less confident cyclists, there are plans for a ‘Quietway’ to run down Calton Avenue and Turney Road. This includes a new design for the junction at Dulwich Village: 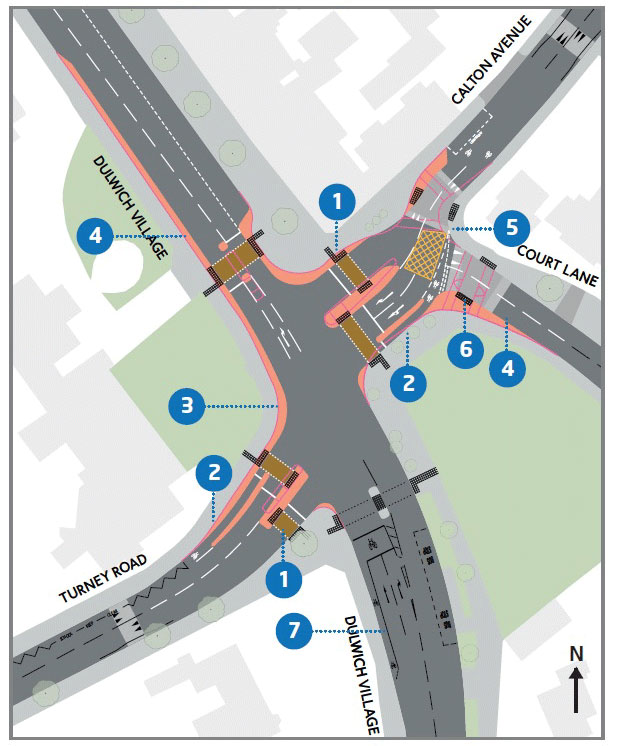 This design has been approved in principle. But Southwark promised, just a few weeks ago, to listen to what the local community has been saying for nearly two years, and to consider an alternative proposal.

The views expressed below have not been formally approved by residents’ associations or local businesses or schools. But they summarise many of the issues raised in community meetings, in emails to the council, and in public consultations run by Sustrans and Southwark.

What are the objections to Southwark’s design?

Roughly two-thirds of those who responded to the recent public consultation objected. You can see the result of the consultation here:

You can also see the results of a survey of residents in Court Lane, which leads directly to the junction, showing that 92% of those who responded had little or no confidence that the proposed changes to traffic had been properly modelled.

Southwark’s design for the junction, where there are two schools for primary-aged children:

The point of the Quietway is to create a network of routes for less confident cyclists. This design creates several potential conflicts between cars and cyclists – please see the list of technical problems in the section at the end.

There are concerns that reducing three lanes to two, and changing the priority from Court Lane to Calton Avenue, is likely to increase traffic queues and rat-running, which in turn will increase air pollution and the risk of accidents.  The Dulwich Community Council has asked for pre-construction trials.

There are also concerns about how the Quietway and new junction design will be affected by the increased congestion and parking difficulties that have been seen on Turney Road and Burbage Road since the introduction of the North Dulwich Controlled Parking Zone (CPZ).

What could be the alternative?

Many people in the local community are asking Southwark Council/TfL to consider an alternative design that puts pedestrians first, with: 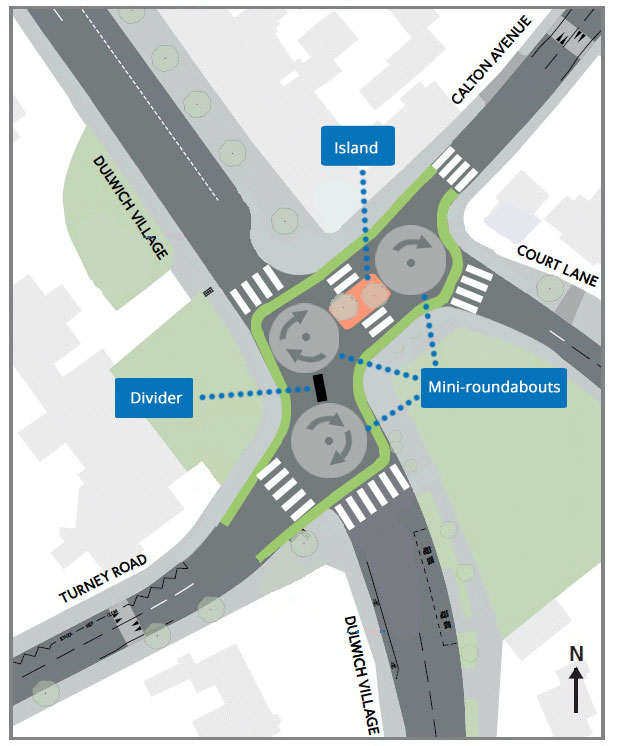 A design like this keeps traffic running slowly but continuously and adapts perfectly – and cheaply – to any variability in traffic flow.

(As we all know, traffic through the junction is sometimes heavier east to west, and sometimes north to south, and there are peaks of congestion at different times of day and year. This YouTube clip shows how heavy traffic on Calton Avenue, part of the Quietway, on school mornings forces cyclists and pedestrians to share the pavement.)

Creative solutions like this have been applied to junctions in other parts of the country. Please look at the YouTube clip about a ‘shared space’ solution in Poynton in Cheshire.

What are the advantages?

A ‘low-speed environment’ junction like this in Dulwich Village would:

Is it possible to get Southwark and TfL to consider a design like this?

Southwark and TfL have finally, after months of persistent persuasion, promised to give a design based on roundels and zebra crossings proper consideration.

Expert traffic consultants Phil Jones Associates have agreed to carry out an initial assessment which will show whether a design like this is feasible.

Members of the Dulwich Village Forum tried to find funding for this initial assessment from a variety of different sources, including Southwark and TfL. In the end, because there is so little time before plans for the Quietway and junction are finalised, crowdfunding (raising money from the community for a one-off project) seemed the best option.

The total cost of the PJA assessment is £9,000 including VAT.

The first part of the assessment  – the feasibility study  –  costs £4,000 including VAT.

And finally (for those interested in the detail), a few more technical problems with Southwark’s design that haven’t yet been answered